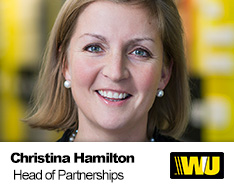 Christina Hamilton is responsible for driving Western Union’s Digital business through integration with digital and FI partners, as well as leading global expansion efforts for WU.com.

Prior to joining Western Union, Christina was the Head of Relationship Management at Capita Asset Services in London, where she led a team of sales professionals and was responsible for third-party partnerships.  She started her career as an Operations and Technology professional at Citigroup Global Transaction Services in New York, and moved into Sales and Account Management roles when she was relocated to London in 2003.  She later joined UBS as CRM Director of a business division of UK Wealth Management.